We all take pictures of houses. Not all of us like to, but it’s a necessity. And we’ve all seen photos of houses that are painful to look at. Sometimes we might think it’s nearly impossible to take good looking photos of a house without $2,000 worth of equipment or spending hours to make sure the lighting is just right. With some useful smartphone camera apps, sometimes the only thing you need is in your purse or front pocket.

Every smartphone has a camera. Some are even more camera than they are phone. And all of them allow you access to tons of apps that make taking great photos easy.

I’ve found a few that I love and that are simple to use and can make your photos look clean and professional.

1. Camera Genius is a clean, simple camera app with just the right amount of useful features. It’s a good app for people who like something clean and uncomplicated. Like any camera app, it lets you focus with just a touch, press the shutter button and, voilà.

But unlike many other camera apps, Genius has a few tricks up its sleeve. When you press the menu button, it brings up a drawer with 8 simple options. 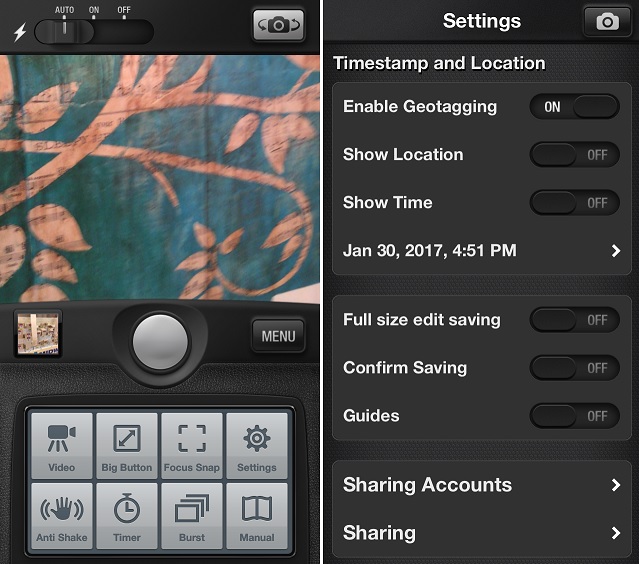 You have options to: Shoot photos, shoot video, make the shutter button bigger (for those shots whee you have to reach), settings, anti-shake (my favorite), a timer, multiple burst mode, a manual which describes everything in detail.

All in all, it’s a simple app with not too many features, but the features it has are very useful. Such as the Anti-shake. When you turn this option on, a little hand appears at the top of your screen. Next to it is a meter that measures how steady your phone is. When you press the button, anti-shake measures how still your camera is and doesn’t take the picture until it’s still enough to eliminate blur. All you do is press the button and in a few seconds, you have a crisp, clear photo ready to post online.

If you want a simple camera app that makes it easy to take great photos, Camera Genius is worth a look. It’s currently $2.99 in the App Store.

2. Camera Zoom FX for Android has a lot of the same features as Genius, plus a few extras. In addition to the anti-shake (called stable shot in this app), you can take a photo by turning on the voice activated option, or make a collage or time lapse with multiple photos.

It also has some more advanced options, such as adding frames or text, and a night mode for low light shots. Some options like the stable shot take a little getting used to. It’s more sensitive than Genius’s anti-shake and may take a bit longer to get the picture, but the result is the same.

But for $2.99, you get more features, for less than most other apps for Android. It’s available in the Play Store.

So you’ve taken photos of your new listing on your phone and you’re ready to upload all of them. You’re happy with them but there’s always one or two that need to be fixed. Luckily, you don’t have to have a degree in Photoshop to fix them. There are a few useful smartphone camera apps you can download to make the editing process quick and painless.

3. Snapseed is easily one of my favorite mobile apps. 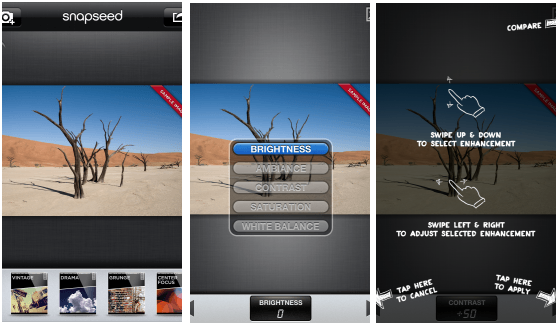 It gives you an array of tools for editing and adjusting photos in a simple and intuitive way.

It’s all based on simply sliding your finger across the screen to select the tool you want to use. The app can automatically adjust settings to make your photo look its best, but you can also slide your finger up and down to select adjustments such as exposure, contrast, and white balance.

Most of these options generally take a little photography knowledge to understand, but the great thing about Snapseed is that it changes the settings in real time as you slide left or right, and you can undo anything simply by hitting the back button.

It’s a wonderful tool if you have a photo that’s too dark or looks too yellow. Play around with it a little bit and you’ll get the hang of it in no time.

It’s available for both Android and iPhone and is Free in the Play Store and 99¢ in the Apple App Store.

4. Touch Retouch is a magical little app, one of the most incredible things I’ve seen. Every once in a while you’ll look at a picture and notice something that shouldn’t be there. A trash can in the corner or a shirt left on the bed. Touch Retouch can help save you time by removing those items instead of having to go back and retake the photo. A trick that used to be reserved for professional photographers and graphic designers with access to the almighty, $400 Photoshop. 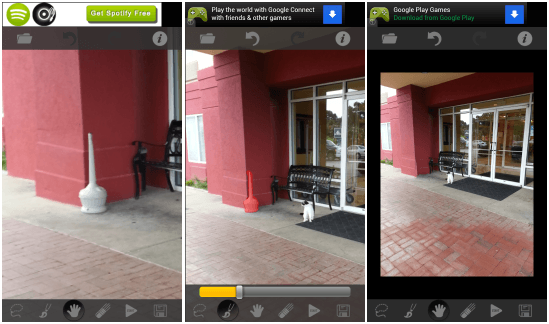 Now, you can just take a photo with an item you don’t want, brush over it with the brush option, hit start, and poof, It’s gone.

It doesn’t work perfectly every time, but it works well enough for little things you may have overlooked.

It’s also on both Android and iPhone, with a free version in the play store and an ad-free version for 99¢ in both the Play Store and the App Store.

While taking photos with your phone is very simple, getting a great shot isn’t always as easy. Apps like these make the usual mistakes a bit easier to fix, and no one will be the wiser.

Thanks to our favorite photographer, Brandon Highland, for this guest post reviewing his favorite smart phone camera apps!

This site uses Akismet to reduce spam. Learn how your comment data is processed.